I have my sSsters Ten, Lynn Bob Square Pats Quilt, a Kate Spain apron, the meh quilt, the Half Square Triangle quilt, thtree cut out bee blocks, two poolside totes, a mad splash of colour peplam top, and  a back button blouse.  I don't have photos of all of these and some I have photo'd before, but if I don't jump in now I'll moss the link up again!  Hoping this counts, Katy ...
Posted by mumasu at 12:52 2 comments:

Out Of My Comfort Zone

I have joined a second bee, The Bumbling Honeys.


For my first block in this group the lovely Jo of dontdrinkandsew.wordpress.com asked for a blue block, so far so good.  Please use solids or small scale prints, as many re-purposed as possible, maybe denim or shirts.  Getting better and better by the minute, an opportunity to use all those jeans I've been hoarding collecting for the last few years.  Can it be Wonky and Improv.  Screeches to a halt.  Wonky? Improv?  Now the thing is Wonky and Imrov has to be devil may care, not I've buggered this up and now I've sewn it together.  Which leaves one in the situation of planned spontaneity, neither of which words go together in my book.  Planned or buggered, that's how I roll.

Still, I had a punt: 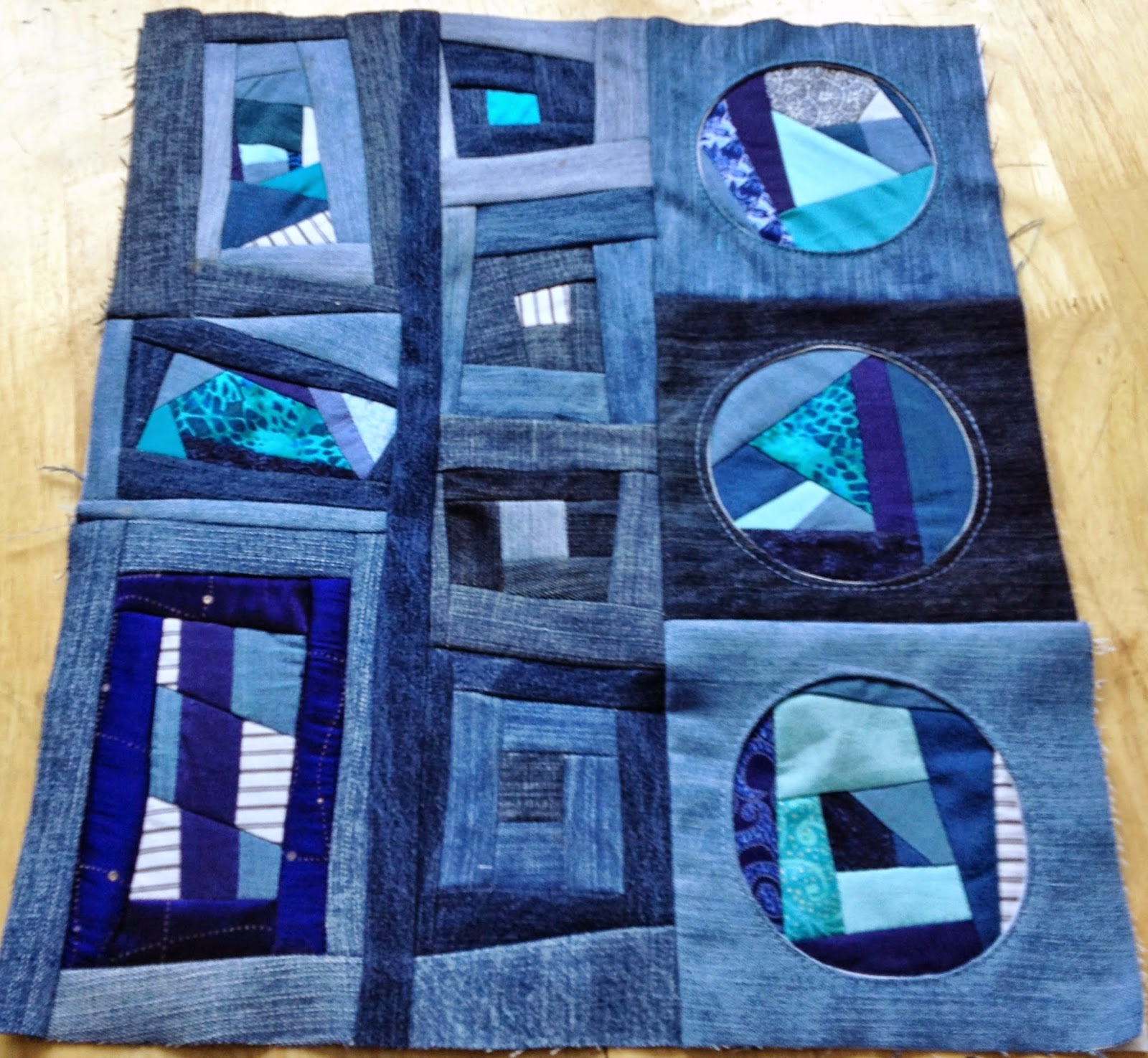 I quite like it.  I may do some more and make some cushions!

Missed by a Mile

I knew it was time to link up, I saw other people linking up, I kept thinking I must link up BUT

A Finish At Last

Yay, I have a finish.  You'll remember from my two previous Finish Along posts that I sent off for this fabric in 2010, pieced it in 2011 and left it in the cupboard for three more years.  I gave it to my friend a few weeks ago and her lovely man photo'd it for me last week.

I am so pleased with it.  My piecing abllity has moved on somewhat since then but it's part of my journey and my friends love it and that is the main thing.

This is an Elanor Burns pattern called Summer Porch.   I can't remember what the fabric is called as I bought it so long ago, but it came as a layer cake from the Fat Quarter Shop, the first fabric I ordered from "abroad" before I blogged or was aware of the online sewing community, what a world has opened up since then.  I didn't change the actual pattern at all, although there is a mistake, but because I am too bloody lazy on deliberation I decided to leave that in.  It adds to its charm.  I pieced the back, cos the fabric was too small, with some of the squares left over and sashed it with some spurious white cotton that was hanging around.  It's quilted in straight lines an inch apart with white Gutteman thread as that's what I had.  And you know what, I love it and they love it, nuff said.

I will be linking up with Katy at the Littlest Thistle with this post.  It's a solitary offering but that's life.

Got A Bit Behind There!

Oops I got a bit behind with my Bee blocks there but I'm all caught up now.

The first was for Rachel who blogs at mamafairy sews.  She had asked for floating stars with a common coloured center and a siggy block.  This was my interpretation:

Next came Niki who wanted improvised blocks.  I've not done this before but a had a go at wonky square in sqaures which ended up looking like this:

I've wanted to join a Bee for quite a while but not really felt in a position to but it occured to me that I could be waiting an awfully long time to do anything if I wait for that, so I jumped in with both feet.  So far the Fat Stash Brit Bee has been a bee of firsts for me.  I'm loving the challenge and the ladies are great, talented and friendly, (virtual wave).

Pop on over to Lily's Quilts.  She is holding a big easter giveaway with loads of her sponsers and fantastic prizes. 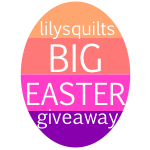 It was great having the FAL to work to last quarter.  I have so many unfinished projects driving me mad.  Here's my list for the second quarter:

1.  So for a second time I'll start with the quilt I made for Sandra, just needs quilting and binding.

2.  Second is the still the scrappy trip, still needs quilting and binding.

3.  Third is still the Gen X Quilter's BOM from last year. All the blocks except one are now done and the sashing is cut, so some progress has been made.

4.  Where's my quilt mum, is it done mum, when's it gonna be finished mum. He's still asking.  Three more blocks are done.  The ones left are definately not in my area of expertise, or to be more precise the things I find really difficult or just plain don't like.  Truth be told those things mean one and the same thing to me.

5.  Something I started for my sister for Christmas 2012, not finished but much further along than it was so progress, yay.

6.  The quilt top that had disappeared is now laid out on the bedroom floor full of pins waiting to be quilted.  I've decided I will give it to my parents as I made it with them in mind.

7.  The HST quilt now named in our house as the Carnival Pants Quilt which Ruby wants for her birthday next month.  I have made a lot of progress with it but whether or not it'll be finished by then is another matter!

8.  I have a another Half Square Triangle quilt I started for the kid's dad who originally didn't want a quilt, but saw it in the making and realised he didn't know what he was thinking!!

I really want to get through this stuff as I'm enjoying having things hanging around so, onward!

I'm linking up with Katy again

A mixed sampler quilt along

mumasu
Colchester, Essex, United Kingdom
As I'm a mum of four I have to cook a lot so it's a good job I like to do it, I love to sew and do the garden. I have to admit to hating housework but I do more of this than anything else. I like to smile, it uses less energy,